Ceremonies and feasts in Iran

The culture of Iran, known as culture of Persia, is one of the oldest in the world. Owing to its dominant geo-political position and culture in the world, Iran has directly influenced cultures and peoples as far away as Italy, Macedonia, and Greece to the West, Russia to the North, the Arabian Peninsula to the South, and South and East Asia to the East. Ceremonies, feasts and traditions are cultural heritages that may provide insight about people and their life. Iran as a long heritage cultural country inherited a variety of ancient traditions that are still live and effective in everyday Iranian life. 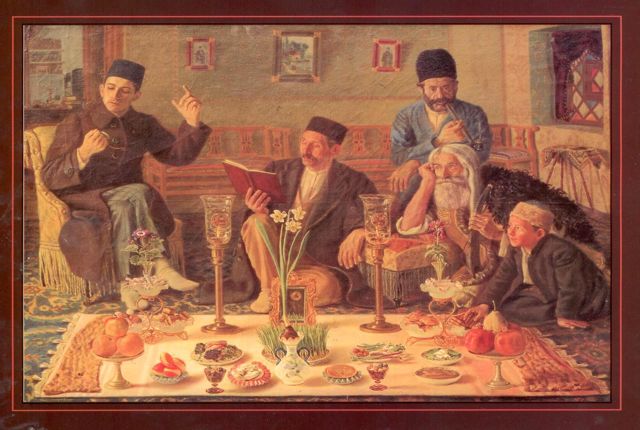 Nowruz is a traditional Iranian spring festival. It starts at the exact moment of the vernal equinox and commencing spring. It is considered as the start of the New Year among Iranians and is celebrated March 20/21 each year. The name comes from Avestan meaning “new day/daylight” and has been celebrated for at least 3,000 years. It is deeply rooted in the rituals and traditions of the Zoroastrian religion. Today the festival of Nowruz is celebrated in Iran, Iraq, India, Afghanistan, Tajikistan, Uzbekistan, Azerbaijan, Kazakhstan, and Kyrgyzstan.
The Shahnameh credits the foundation of Nowruz to the mythical Iranian King Jamshid, who saves people from a winter destined to kill every living creature. Jamshid may symbolize the transition of the Proto-Iranians from a hunter-gatherer lifestyle to animal husbandry and a more settled life. 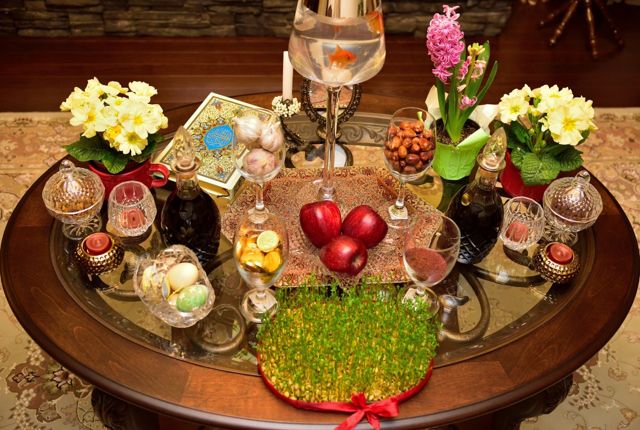 Sofreye Haft Sin: Haftsin came from Jamshid because he destroyed the evil that made pars lands weak, therefore, in first day of Iranian calendar people called it Nowruz (starting of a new day) and they put 7 different beans on their table as a sign of thanking nature for giving humans all they need. Iranians put haftsin on their tables every year: 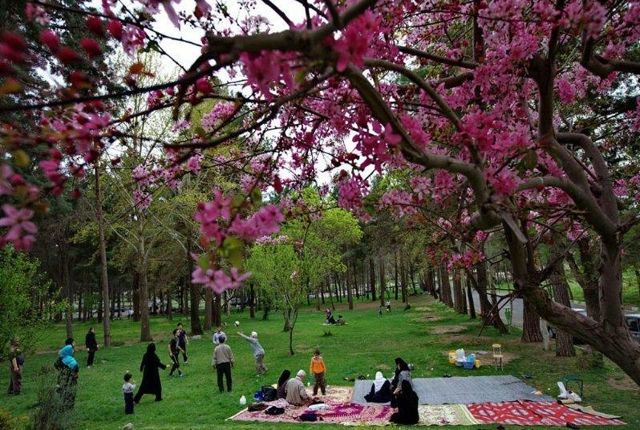 Sizdah Bedar also known as Nature’s Day is an Iranian festival held annually on the thirteenth day of Farvardin (the first month of the Iranian calendar), during which people spend time picnicking outdoors.It marks the end of the Nowruz holidays in Iran. Sizdah Bedar is the Persian Festival of “Joy and Solidarity”, Because of the end of twelve days (a sample of twelve month) they celebrate the 13th day as a new beginning of the next twelve months and it has no relations with the number 13 (as an unlucky number). It is celebrated outdoors along with the beauty of nature. In this day at the end of the picnic the people will throw away the greenery (Sabze) collected for Haft-Seen. It is also customary for young single people, especially young girls, to tie the leaves of the greenery before discarding it, expressing a wish to find their right partner. 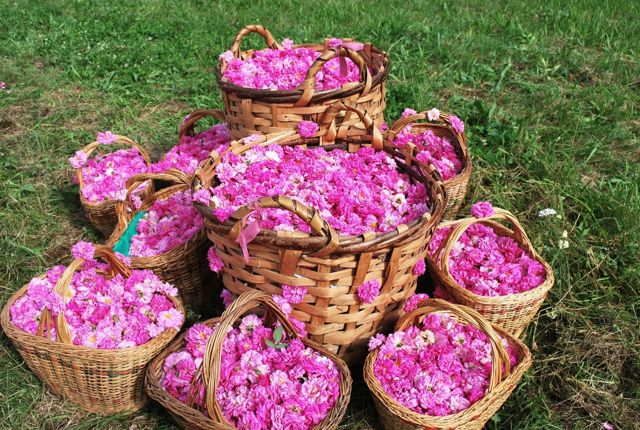 Rose water festival (Golabgiri): Ghamsar (also Qamsar), the city of roses in Kashan County, is where you can sense the very beauty of May in desert. Although Kashan is a historic city with ancient remains, paradisiac gardens and old houses and also close to Maranjab Desert, Ghamsar with its many rose gardens and a traditional rose water festival (Golabgiri in Persian) is one of the first choices when visiting Kashan in the spring. Golab is a portmanteau of “gol” meaning flower and “ab” meaning water. Golabgiri (or rose water distillation) is an old festival which usually begins mid-April with blossoming of a special kind of rose named “Mohammadi” and lasts till early June. This rose with a good odour grows in Ghamsar and nearby villages. In the time of Golabgiri, you can either watch or participate in rose picking in the beautiful gardens (remember to ask for permission before entering the gardens). 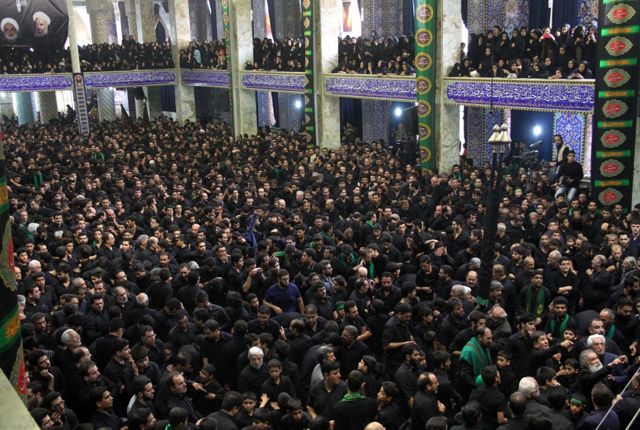 Day of Ashoura: Ashura is the tenth day of Muḥarram, the first month in the Islamic calendar. For the majority of Shia Muslims Ashura marks the climax of the Remembrance of Muharram, and commemorates the death of Husayn ibn Ali, the grandson of the Islamic prophet Muhammad, at the Battle of Karbala on 10 Muharram in the year 61 AH (in AHt: October 10, 680 CE). Mourning for the incident began almost immediately after the Battle of Karbala. Popular elegies were written by poets to commemorate the Battle of Karbala during the Umayyad and Abbasid era, and the earliest public mourning rituals occurred in 963 CE duringthe Buyid dynasty.
In Afghanistan, Iran, Iraq, Lebanon, Azerbaijan, Bahrain, Bangladesh and Pakistan, Ashura has become a national holiday, and many ethnic and religious communities participate in it 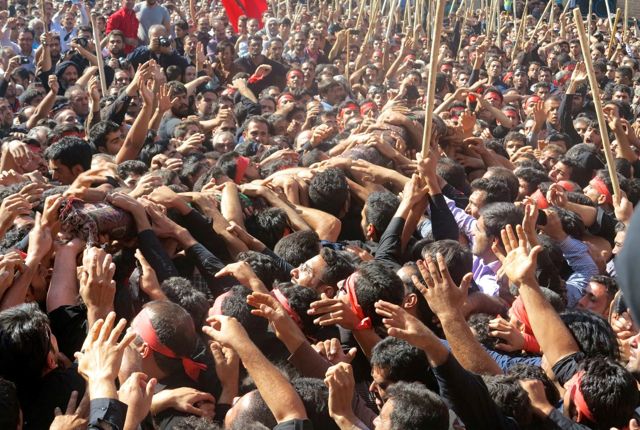 Carpet Washing in Mashad-e-Ardehal: The ritual of the carpet washing in Mashhad Ardehal symbolizes a funeral held for Imamzadeh Soltan Ali (AS), a descendant of Imam Muhammad Baqir (AS), in the region of Mashhad Ardehal in 732 CE. The ritual is held annually on the second Friday of fall by the young men of the city of Fin and the village of Khaveh, located near the shrine of the imamzadeh. A large carpet, which is kept at the shrine, is wrapped in green textile and delivered to the young men whirling sticks in the air. The sticks symbolize the clubs the people of the region used as weapons centuries ago. People around Ardehal and Kashan perform a special ceremony on this day, washing this carpet in the spring nearby to commemorate the event during which the dead body was wrapped in a carpet and later the carpet was washed there. During the ceremony, people also damn his enemies who murdered him and wave clubs up in the air to show their feeling of hatred toward his enemies.
This is first time an element from Iran was registered on the Representative List of the Intangible Cultural Heritage of Humanity. This list covers cultural expressions that are testimony to the diversity of intangible heritage. It is designed to help raise awareness of the importance of this heritage. 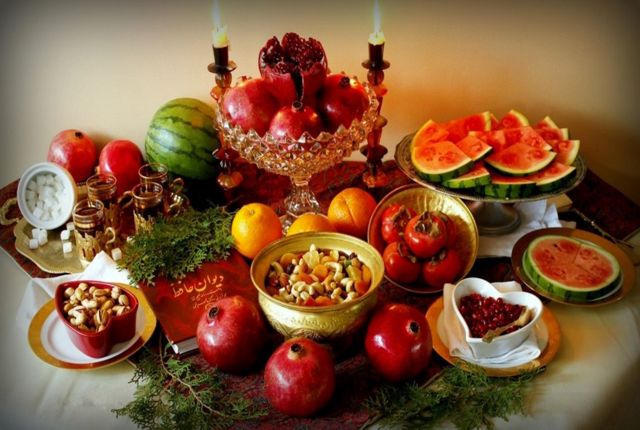 Yalda (Chelleh) is one of the most ancient Persian festivals annually celebrated on December 21 by Iranian all of the world and it is the longest night in the year. Yalda means birth and it refers to the birth of Mitra (the goddess of light). It is also the day of harvesting crops and the beginning of farmers’ rest period. People gather together in the house of the eldest member of the entire family enjoying themselves eating summer fruits as well as nuts. They also read poems of Hafez and have a long night of Joy and celebration. 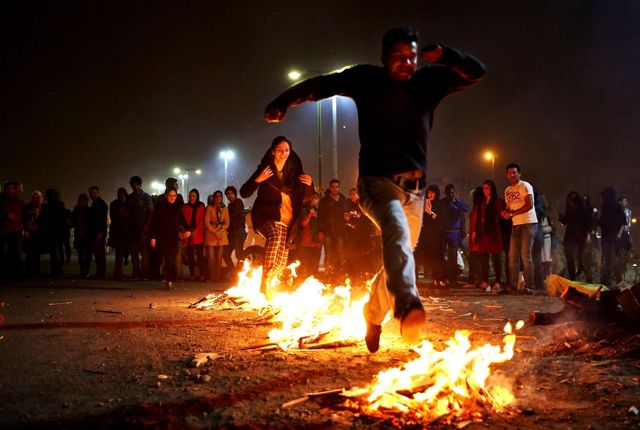 ChaharshanbeSuri: Festival of Fire, last Wednesday night in the Iranian Calendar year. It marks the importance of the light over the darkness, arrival of spring and revival of nature. Before the start of the festival, people gather brushwood in an open, free exterior space. At sunset, after making one or more bonfires, they jump over the flames while symbolically ask the fire to take sickness away and bring about health. 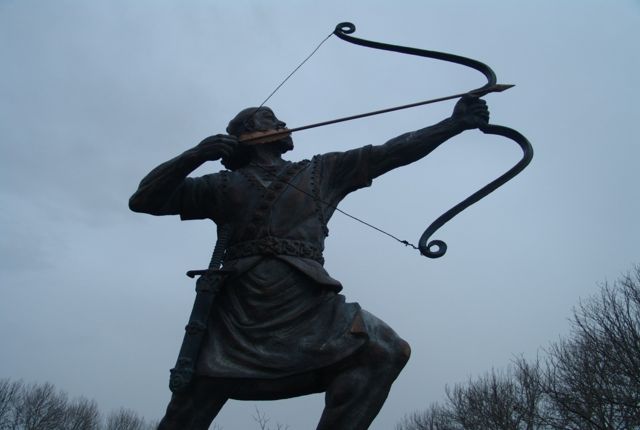 Tirgan: At the evening of the 12th day of the fourth month of Persian calendar (Tir), the 2nd or 3rd of July, people in Mazandaran province celebrate Tirgan. Tir means arrow and Tirgan refers to the occasion when Arash, the legendary bowman, shot an arrow to indicate the borderline between Iran and Turan. Arash lost his entire energy and died afterward. The feast includes many traditions like plays, poem reading, singing, eating, drinking, etc. 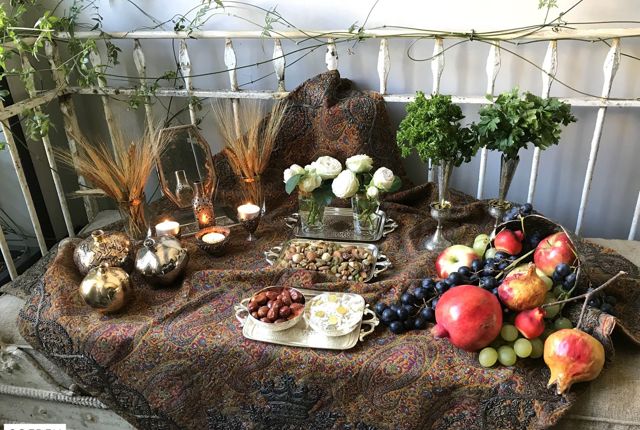 Mehrgan: Mehr is the 7th month of Iranian calendar, app Sept 21st to Oct 20th, and the name of the goddess of the Sun. Mehregan is one of the two most ancient Iranian festivals known, dating back at least as far as the earliest Aryans (Iranians). The word “Mehr” (in Mehregan) in the Persian language means kindness. Mehr represents knowledge, love, light and friendship. It is a day of thanksgiving and everyone show the love they have for each other. 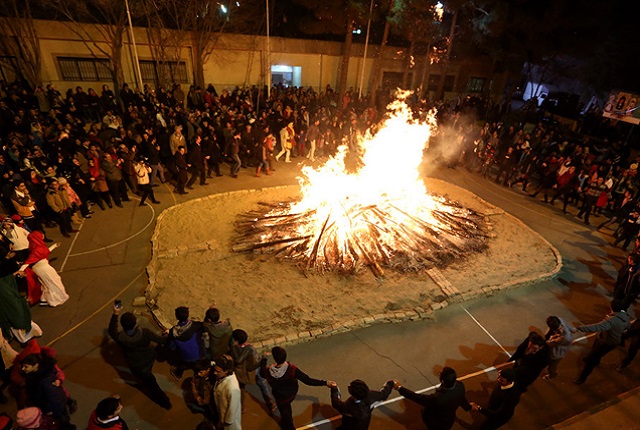 Sadeh is an Iranian festival that dates back to the first Persian Empire, Achaemenid Empire. Sadeh celebrates 50 days before Nowruz. Sadeh in Persian means “hundred” and refers to one hundred days and nights remains to the beginning of spring. Sadeh is a mid winter festival that was celebrated with grandeur and magnificence in ancient Persia. It was a festivity to honor fire and to defeat the forces of darkness, frost, and cold. 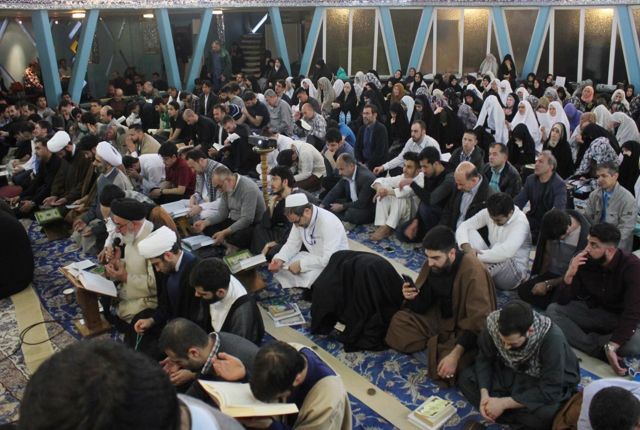 Itikaf  is an Islamic practice consisting of a period of staying in a mosque for a certain number of days, devoting oneself to ibadah during these days and staying away from worldly affairs. The literal meaning of the word suggests sticking and adhering to, or being regular in something, this ‘something’ often including performing nafl prayers, reciting the Qur’an, and reading hadith.